This week we have learnt some more friendly letter sounds and these have been: ‘ar’ as in car, ‘or’ as in fork and ‘ur’ as in purse. We have also been spelling out words with all these sounds using Floppy’s Phonics programme on the interactive whiteboard.  We have also been continuing to learn the alphabet song.

In Maths we have been revising 3D shapes as we were just starting to get the names of these last week. We played a memory game where a 3D shape was removed and we had to name which one was missing. This was good fun and really helped with remembering the names of the shapes!

This week we have been learning about doubles and halves of numbers up to 10. For example double 2 = 4, half of 6 = 3. The children have been using their fingers to help them work this out. We have also been continuing to count in 2’s and 10’s and have started to learn how to count in 5’s.

We have also done a bit of revision on addition and looking at number sentences, using our fingers as a learning tool to help us work out the answer. We have also been using our knowledge of doubles and number bonds to 10 to recognise the answers more quickly e.g. 4 + 4 = 8 and 7 + 3 = 10.

We played a fun game on the interactive whiteboard that really helped us to work out the addition questions quickly as we were up against a timer! If you would like to play this game at home, click the link below:

This week some of us have been doing some mark making on the playground to help us to form some of the more tricky letters. This is good fun and a great way of learning how to write those harder letters. When we got more confident we had a go at writing some simple words. 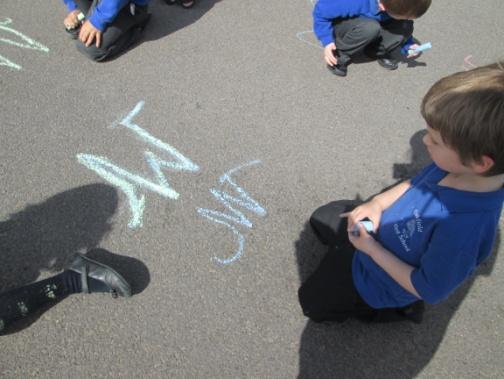 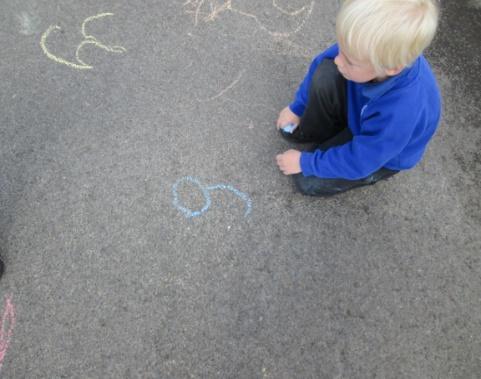 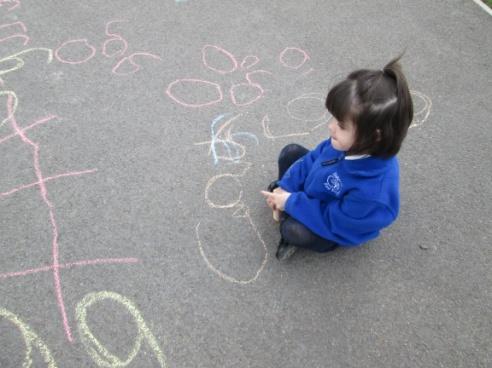 This week we have continued the minibeast theme as the children have really enjoyed this element of our topic. We are focussing a lot more on attempting independent writing and so the children decided that they would like to make their own minibeast book. The children each chose their favourite minibeast to draw and then were really motivated to have a go at writing a label or sentence to describe their minibeast. The pages looked fantastic and the children tried extremely hard with their writing and were very proud of the finished book. This project has inspired some children to do some more writing and they have been choosing to use the writing area more to make other books of their own or lists. 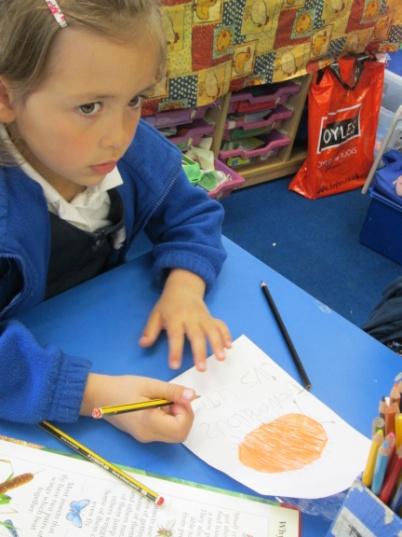 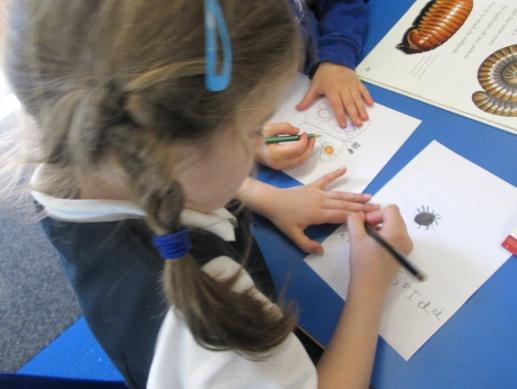 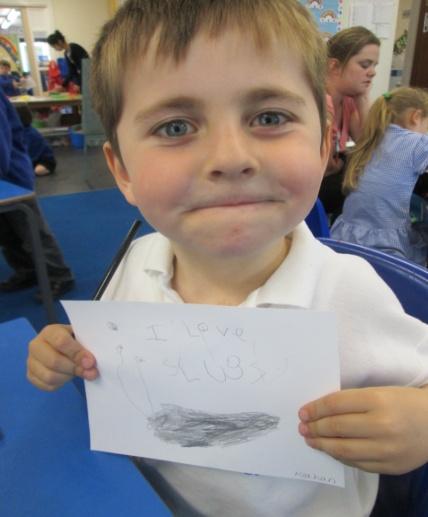 This week as part of our topic ‘All Creatures Great and Small’ we have been looking at pets. We looked what animals need to be looked after properly and some of spoke of our pets from home. We looked at animals that we would like as a pet and made a pictogram graph to see which animal was the most popular and the least popular. We had some interesting choices!

We were very lucky to have some special visits this week from some unusual pets! Mrs Morgan kindly brought in her pet tortoises Terrence and Lola for us to have a look at and handle. We were amazed by these lovely creatures and their beautiful shells and scaly skin. It was good fun watching them on the carpet having a race with each other! It was clear to see that Lola was certainly not feeling as quick as Terrence and was more interesting in eating a strawberry! 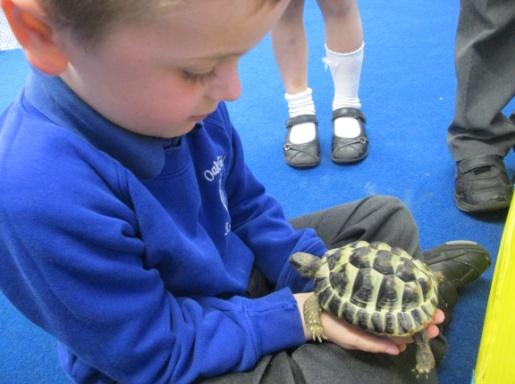 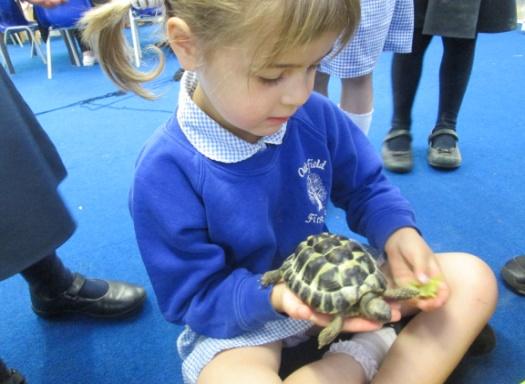 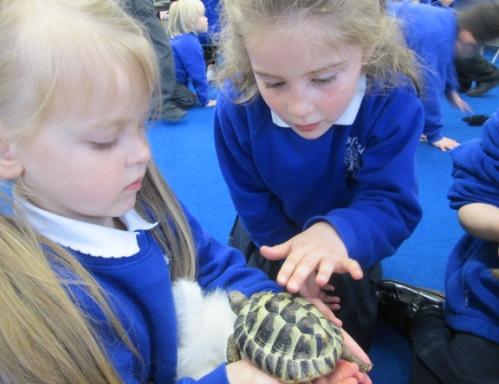 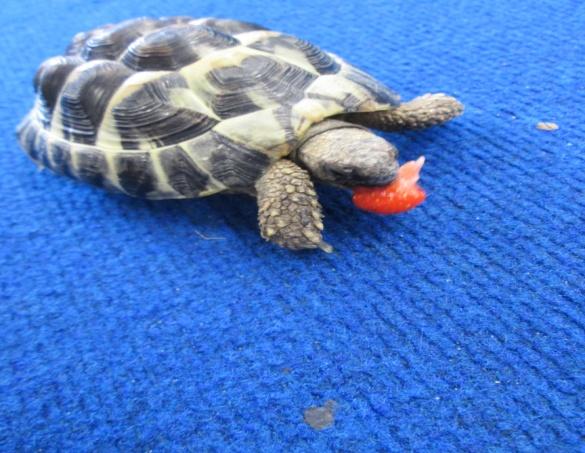 We also had some pet surveys which we really enjoyed. We went around to lots of children and adults and asked them if they had a pet or what their favourite pet would be. Whilst doing this we learnt how to do a tally and add up all the lines for the total.

In a discussion about where pets live, we matched pictures of pets to the homes in which they like to be in. This then led on to a discussion about farm animals in preparation for our trip to Odds Farm. We read the story ‘Farmyard Hullabaloo’ by Giles Andreae and spoke about all the different animals and which ones we may see next week. We also looked at animals and their young and learnt some new names of baby animals such as foal and calf. This lead on to a discussion of animal names on other languages and we were given some words in Russian, French, Hungarian and Spanish from children that speak those languages.

On Thursday we were lucky to have a visit from Joseph’s Nan and the family dog called ‘Sandy’ who is a lurcher. Sandy is quite a big dog and some of the children had never seen such a big dog before. Sandy was so good and liked to have a fuss from us and was especially good when he was asked to sit and have a treat. 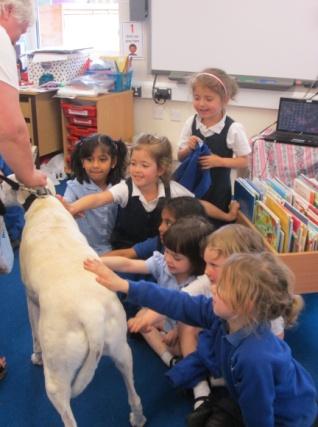 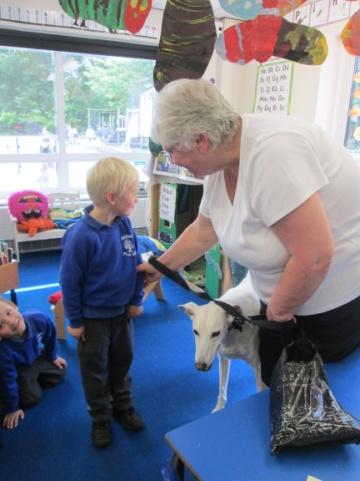 As part of the children’s brainstorm of ideas on pets, they chose to have a role play vets which was set up for them to play with. There were some cuddly toys, first aid kits, tills and telephones for the children to role play being a vet and looking after the animals. The children were also provided with writing opportunities where they could write a shopping list for their pet animal, labels to name their animals and a form to fill out when an animal was sick. The children really enjoyed taking part in this activity.

The children also wanted to paint pictures of pets. Some books were provided for the children to get ideas on how to paint the animals and then they had a go at making some lovely paintings including cats, dogs, fish and guinea pigs! 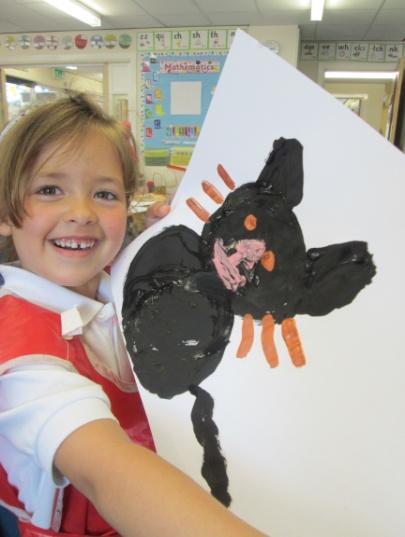 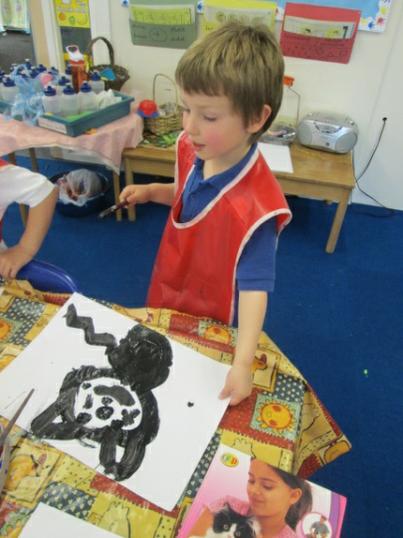